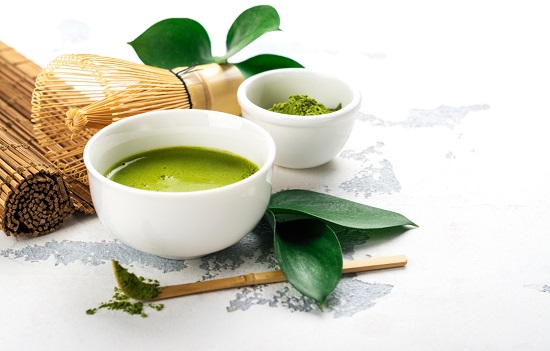 Before you start envisioning matcha tea leaves morphing into marijuana leaves (which may also mean you’ve taken one too many tokes before reading this), the connection is much more subtle.

In short, it has to do with how a particular polyphenol and specific amino acid both found in matcha interact with the human endocannabinoid system (ECS) – as well as one another.

What’s the Deal With Matcha Tea?

Yeah, we went all Jerry Seinfeld on you.

So here’s the deal. Matcha tea promotes a calm sense of alertness. If that makes any sense. It essentially improves concentration while simultaneously calming the mind.

Matcha is usually associated with Japanese tea ceremonies, but is also a popular drink among those who practice Zen Buddhism. In fact, wander into a Zen Buddhist temple and they’re likely to offer you matcha tea over coffee.

Just as in coffee, it’s caffeine that provides the buzz from matcha. But it’s typically a third to a half of the amount you find in an average cup of coffee. (By average, we DON’T mean an extra large dark roast with three extra shots.) Plus, rather than giving you the jitters and then slamming you into a wall, the caffeine in matcha has a more gradual and sustained effect on the body, as oppose

It’s not the caffeine that’s got cannabis researchers all a titter though.

The Matcha Tea and Cannabis Connection

Among the vast array of nutrients that matcha offers, there is the dietary phytochemical known as epigallocatechin gallate (EGCG).  EGCG is a stress-relieving crystalline flavonoid compound. Sounds fancy, right?

All you need to know is that along with relieving stress, this plant polyphenol also appears to have anti-oxidant, anti-inflammatory, cardiovascular, and weight loss effects. Consumed daily, it can even work with organ systems to increase metabolism, modulate cholesterol levels, and forge anti-aging and even anti-tumor pathways.

If that weren’t fascinating enough, they’re also looking at the role of the amino acid l-theanine and how it dances, as it were, with EGCG.

The Entourage Effect of L-Theanine

L-theanine binds with a receptor that’s known for its inhibitory signaling for both focus and relaxation. But it also ties with two other receptors that are shown to improve brain health and encourage neuronal growth. Researchers are looking at how these receptors are linked to preventing and slowing the progressions of diseases such as Parkinson’s disease and dementia.

Unlike with EGCG levels that remain steady regardless of the grade of matcha, higher grade teas will likely have more l-theanine. Even so, all matcha has a favorable amount of it.

Why does this matter?

Because much in the same way that different cannabinoids interact to create astounding benefits, l-theanine and EGCG also partake in the entourage effect. When combined to become a true power couple, they go above and beyond simply encouraging focus and relaxation. They work together to influence one’s physiological and psychological states.

They also, incidentally, make the matcha taste better. So there’s that.

Support Your ECS With Matcha Tea

Next time you’re fixing to get coffee, consider the matcha tea and cannabis connection. Then maybe give matcha a try instead.

Even if cannabis is a huge part of your life, finding new ways to keep your ECS healthy and robust is never a bad idea.

Meanwhile, if you’re looking for more articles about all things cannabis, keep checking back with us!

Cannabis As a Potential COVID-19 Treatment?

Before you get too excited, this IN NO WAY means using cannabis…

The 3 Basic Rules of Scaling Your Cannabis Brand

Let’s clarify. We’re coming right out of the gate on this one…