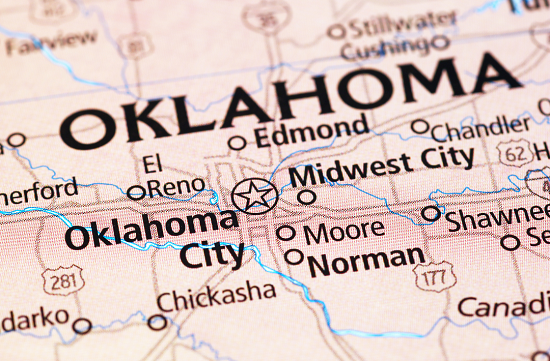 Said no one ever. Until now.

It’s true. Even steeped in the world of cannabis marketing as we are, we’ve only recently discovered that if you want to dabble in the business of medicinal cannabis, Oklahoma is a medical marijuana hotbed.

Well, more than a few folks, it turns out.

The Pioneering Renegades of ‘Tokelahoma’

Take a little cruise through rural Oklahoma and you’re likely to see more than your fair share of wide open fields, work sheds, and greenhouse tunnels. But what they’re growing in those greenhouses might surprise you.

Chip Baker is among the folks that have discovered the beauty and relative ease of growing marijuana in Oklahoma for medicinal purposes. And he’s no newbie. This is a guy who’s been in the industry, as it were, since he was 13.

He’s grown the leaf in places as varied as the woods of Georgia to the lakes of Switzerland. Of course, he was part of the magic as it exploded throughout Colorado and California. A few years ago, he and his wife set up shop (or greenhouse) when Oklahoma voted to legalize medical marijuana.

“I love California weed, I love California growers. But there’s a certain snobbiness and ‘we’ve done it all,’” said Baker. “But in Oklahoma… it’s this newness. Adventure. That’s partly why we’re here.”

David Lewis, on the other hand, is a lifelong Oklahoman. He’s now the COO of the state’s largest indoor grow house. He was baffled to learn that 10 percent of the population have medical marijuana cards. “I never would have thought we’d have almost 400,000 patients consuming medical marijuana. It’s shocking,” he said.

Oklahoma has this image of outlaw country. Yet, just because people are conservative, work on the land, and/or go to church, that doesn’t mean they aren’t benefitting from cannabis.

Frantz-Holly was one of those who found huge benefits from cannabis.

Suffering from PTSD, she found that certain prescription pills left her suicidal. But cannabis helped in a way that nothing else had. And she feels it saved her life.

Taken with the effectiveness of cannabis, she now grows it herself. But for a long time, she could only get cannabis through the black market.

“I literally got drug charges when I was 21 for a joint. And did 30 days in county jail. For a joint!” said Frantz-Holly. “And now I’m picking up 75 marijuana plants to go home to my commercial grow.” She’s among the 7,000 other commercial growers across the state.

The Ease of Medical Marijuana in Oklahoma

Baker says Oklahoma makes it simple and affordable to break into the business.

The application fee for growers, processors, dispensaries, and transporters is $2,500. It’s only $100 for patients and just $20 for disabled veterans. While Baker waited two years to apply in other states, he said it took him only 15 minutes to apply in Oklahoma.

“Oklahoma is the reddest of the red states. And I think what that translated to in medical marijuana was a free market approach,” said Baker. “The government wanted the free market to settle out who the winners and losers would be. As a result, you saw very limited restrictions on getting into the market and a lot of people participated.”

It seems to have worked. Baker says that industry-wide, the business grew 50 percent last year. So yeah. If you’re looking to break into medical marijuana, Oklahoma is the place to be.

Apparently, the cornstalks aren’t the only things as high as an elephant’s eye…

Do You Own a Marijuana Business?

Whether you’re just starting up in Oklahoma, or firmly rooted in Michigan (or elsewhere), we can help with your marketing and PR strategies.

Contact us today for a free consultation. And find out how we use our connections and years of experience in cannabis marketing to put your company in the spotlight.

Unless you grew up in Jamaica or on a commune, it may…

Don’t worry. We aren’t going to stomp on your specific brand of…