Could Democrats Win in 2020 with a Nationwide Proposals to Legalize Marijuana? 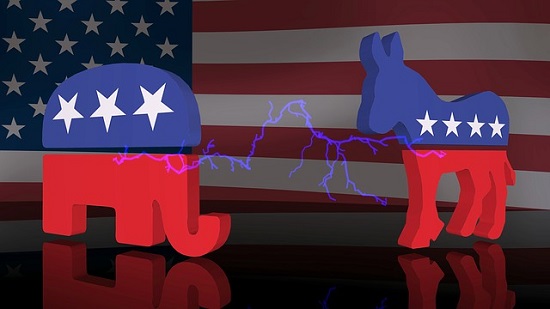 And this was seemingly the case in his home state of Michigan this past November when voters chose to make Michigan the first state in the Midwest to legalize recreational marijuana. Meanwhile, Democrats won the state’s gubernatorial, attorney general and U.S. Senate races too.

As a result, Moore believes that ballot initiatives “are the answer” to electoral victories and that if Democrats are truly serious about winning in 2020, they should put nationwide proposals to legalize marijuana on the ballot.

Especially in those precious swing states.

The Changing Tide in the Midwest

The states in the (mostly northern) middle part of the country that teeter between red and blue are a good place to start concentrating these efforts.

Along with Michigan legalizing marijuana, Missouri voted to allow medical cannabis and Democrats picked up four gubernatorial seats in the Midwest in the midterms.

With the gubernatorial wins of Gretchen Whitmer in Michigan, Tim Walz in Minnesota, J. B. Pritzker in Illinois, and Tony Evers in Wisconsin, there is strong evidence that this area of the country could be staging a “green” revolution of sorts.

This political landscape is rife for the cannabis reform efforts the new governors-elect are proposing too.

Illinois already has an existing medical cannabis system in place. Citing the economic benefits, Pritzker feels that the state should consider adult-use legalization “right away.” He’s also in support of a system that will expunge the criminal records of individuals who’ve been convicted of cannabis-related offenses.

And Whitmer said that Michigan voters have made it clear that “no one should bear a lifelong record” for an offense that has since been legalized. She will also support the creation of policies to alleviate this problem.

Nationwide Proposals to Legalize Marijuana Could Turn the Tables

Michigan voter turnout for the most recent midterms reached its highest levels in 56 years. And all across the country, there was a higher turnout of young voters – who still tend to lean more Democratic than Republican.

But Moore still believes that putting marijuana legalization initiatives on state ballots across the country could bring out Democrats who “don’t vote that much” or who simply “don’t like the politicians.” And there are plenty of those. (For good reason.)

And he could be right. There IS some limited data that seems to support Moore’s theory.

In October, before the midterms, Myers Research conducted a poll. Professional interviewers spoke with 500 registered voters in Wisconsin. Along with the standard questions to determine the level of support for cannabis legalization, they also asked respondents if they’d be more likely to vote in an election if they knew their ballot included an advisory question about cannabis policy reform.

A whopping 56% said they would. And the self-identified turnout boost was particularly sizable for Democrats. So there ya go. Or at least that’s how 500 folks roll in Wisconsin.

Marijuana Legalization Will Be a Hot Topic in 2020

With so many Democrats and Republicans in favor of legalization, it does seem that it’s time to institute nationwide proposals to legalize marijuana.

Whether Moore is on the mark remains to be seen though. Since legalizing marijuana is one of those rare issues with bipartisan support, it may bring out more Democratic AND Republican voters.

But that could be fine. Because the way we see it, Democrats and Republicans getting along sounds like a pretty good thing these days…

Could Expunging Cannabis Convictions in Michigan Be a Reality?

What NOT to Do When Pitching Your Cannabis Business

Let’s face it. Over the years, the cannabis industry has become a…