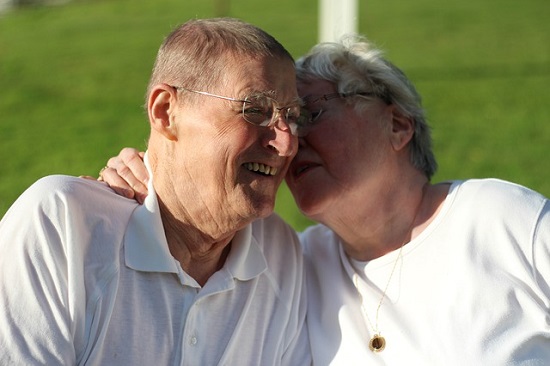 Not to be a total buzz kill, but watching a parent or grandparent struggle with pain or other symptoms is a huge drag.

Even if you don’t have the greatest relationship with them. (Of course, it’s especially tough if you do.)

So how do you go about suggesting the option of cannabis to a generation that was reared on the evils of weed?

It turns out that helping senior citizens transition to cannabis might be easier than you think.

It depends on a number of factors though.

The Downside of Aging

If you’ve been living in a body for at least four decades, you’ve already discovered that the older your body gets, the more likely it is to start feeling pain in places you didn’t even know could hurt.

So by the sixth or seventh decade, chronic pain can become a reality.

Some seniors just regard this chronic pain as a consequence of aging. A necessary evil. So they either live with the misery of it, or take medication of some sort to deal with it.

Then there’s the onset of new diseases and disorders (trouble with sleep, anxiety, depression, responsive behaviors related to dementia, to name a few) that come with the general wear and tear of aging too.

Add to that the emotional changes that come from experiencing so much loss – friends, spouse, license, mobility.

So it makes perfect sense that an elderly person might have a medicine cabinet or cupboard full or prescriptions which they just blindly take all day long “because the doctor said so.”

But is that an entirely accurate picture?

The Upside of Aging

The fact is, seniors are the fastest-growing segment of both new and returning cannabis users. Yep.

So while we’d love to spare you the whole “with age comes wisdom” cliché, it does somewhat apply here.

Dealing with an aging body often means there’s a willingness to openly (and wisely) embrace new modalities for relieving pain and other symptoms. After all, it someone is tired of taking seven or eight prescriptions, they often won’t give a second thought to trying something new.

Especially if there’s a chance it will work better than what they’re currently using.

One of the most profound benefits of cannabis has been its capacity to reduce heavy drug load by lowering or even replacing pharmaceutical options.

So when 84-year-old Betty finds this to be the case for her, she’ll sing the praises of cannabis to 76-year-old Earl. Then Earl tells 69-year-old Delores. And so on.

“It turns out the devil weed works pretty good,” they say. Because it does.

The main question is, how well do you really know your parent’s or grandparent’s stance on marijuana?

Even if they were involved in Reagan-era “Say No to Drugs” marches, they may not see it as “devil weed” at all today. In fact, they may already be taking nips of cannabis oil to help them sleep or handle neuropathic pain.

They simply haven’t disclosed it to you.

With all of that being said, there’s still the possibility that your parent or grandparent is going to resist your suggestion of cannabis.

And of course, you can’t force them to try it. Nor should you – since you also need to consider how cannabis will interact with their current medications. Even CBD has the potential to alter the efficacy and potency of common medications, including the popular Warfarin.

The best that you can do is remind them that while they’re still here, they deserve to feel as good as possible and that cannabis, which is now LEGAL, can help them with this. And without all the side effects of pharmaceutical medications.

If they tend to listen to doctors before anyone else, then find a cannabinoid-medicine focused doctor or nurse practitioner whom they could see to reassure them.

And finally, remember that they’re dealing with a different set of values and beliefs than you are. Although you might mean well in offering cannabis as a tool, they may not see it that way. Even though it’s legal, they may still wrestle with it as an ethical or moral issue.

At which point, you simply have to let it go.

Allow What Is to Be

Transitioning senior citizens to cannabis is just one of the newest chapters in this ever-changing industry.

So if you’re in the process of convincing grandma or dad to get on board, be patient. Let them ease into this important decision.

You’re much more likely to find success that way.

And keep checking back with our blog to stay up to date on all things cannabis.

Recreational Sales of Marijuana Are Now Legal in Michigan

As of yesterday, December 1st, recreational sales of marijuana are now legal…