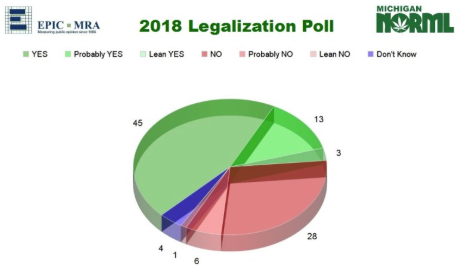 The results of a new poll show a large percentage of Michigan voters support the legalization of marijuana. Johnny Green of Weed News said the Michigan NORML and the EPIC-MRA research group released the results of their 2018 survey, which reported an all-time high number of people in support of marijuana legalization.

“The poll found that 45 percent are strongly in support, 13 percent say they would probably vote yes and 3 percent are leaning that way,” said John McNeill of WKZO. This equals a total of 61 percent in support of the proposal. McNeill said that is an increase of about 8 percent since the last survey distributed in February 2017.

Wood TV reported when comparing these results to last year’s results, the number of voters against the proposal has dropped from 40 percent to 35 percent. “We thought 2020 would be our year but voters seem ready for it now,” said MINORML Board Member Brad Forrester.

MINORMAL Board Member Rick Thompson said the results showed support in areas of Michigan where it’s traditionally more difficult to advance marijuana law reforms. He said, “Michigan’s medical marijuana program has proven to the entire state that cannabis is not something to be feared anymore.”

Looking for more proof that marijuana can help cancer patients? Then head…