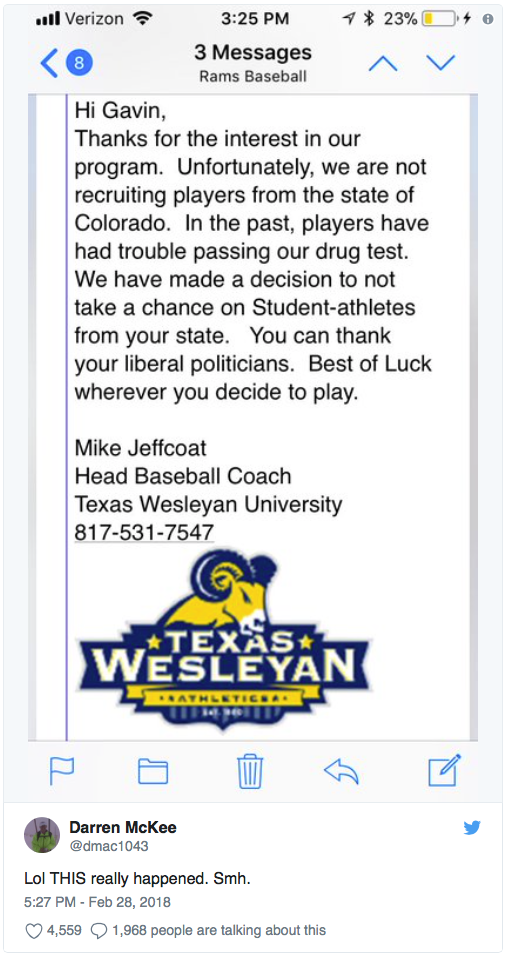 A screenshot of the email was tweeted by 104.3 The Fan sports host Darren Mckee and quickly went viral. The University posted a comment on its website in response to Jeffcoat’s email and said, “… we want to reiterate that this email does not reflect our values and we do not condone discrimination. This includes discrimination on the basis of race, color, origin, ethnicity, gender, age, religion, disability or sexuality; or the political legislation of one’s home state.”

The recipient of this email, Gavin Bell, is a baseball player at Cherokee Trail High School in Aurora, Colorado. “I’ve never seen a coach send an email like that to a kid,” said Cherokee Trail’s coach Allan Dryer. “I was kind of shocked a coach would connect a political issue to a kid. It just made no sense. The student has not been in trouble one time at our school.”

Dryer wasn’t the only person to voice an opinion about the email. Matt Stephens of the Denver Post said, “Fun fact: Colorado teens are all a bunch of dope-smoking hippies. At least, that’s what Texas Wesleyan baseball coach Mike Jeffcoat seems to think.”

Also, David Sheridan who refers to himself as a ‘hardcore liberal’ responded to McKee’s screenshot on Twitter and said, “If this is a D1 program and therefore scholarships attached, if it were my kid, I’d lawyer up. You can’t just say “we don’t give scholarships to kids from Colorado.” What’s next, no scholarships to, you know, “urban” kids, because they do drugs?”

With all the backlash arising from this email, it seems athletes living in states that allow recreational marijuana shouldn’t be concerned. The reaction of the University and people on Twitter show the majority do not support Jeffcoat’s email.

“The decision to fire Jeffcoat was swift and the right decision,” said McKee. “I applaud the official from TW. However, it’s obvious they have deeper issues. Buyer beware on that school.”

Could expungement reform in Michigan soon be a reality? It’s looking that…

The Journal of Health Economics published a study last month titled, “Do…

When Will We See Cannabis Lounges?

The cannabis industry is booming. And over the next three years, it’s…