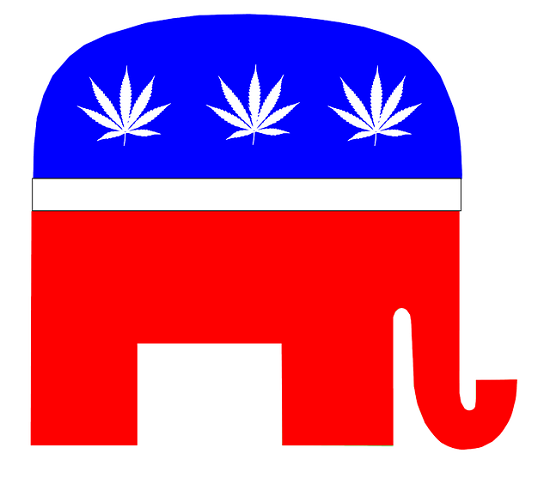 Remember when legalizing marijuana was the Democrats’ game; with Republicans admonishing the weirdo hippy drug fiends who supported it?

Those days are over. Why?

Come on. We all know why. There’s money to be made. BIG money.

The lure of the promise of huge profits has many Republicans now embracing marijuana. And those who once cursed the evil effects of Mary Jane have now become lobbyists, consultants, attorneys and entrepreneurs in this burgeoning market.

It is indeed the dawn of a new kind of hypocrisy.

Just A Few of the Many Republicans Now Embracing Marijuana

We won’t bog you down with too many politicians. Nobody wants that. But let’s take a look at a few players on both the state and national level.

Two potheads are better than one.

Okay, they’re not potheads. But it was interesting how quickly former state House Representative Eileen Kowall, a White Lake Republican, became a lobbyist.

In fact, it was less than two months after term limits pushed her out of the Legislature back in 2015 that she registered as a lobbyist and signed a consulting contract with Michigan Green Technologies. According to the U.S. Securities and Exchange Commission, she received a cool $15,300 worth of shares from Cannabis Science, a Colorado-based company tied to Michigan Green Technologies.

Okay. Fine. But records show that the shares were later returned in December of 2015 and Kowall resigned her services due to “conflict of interest.”

Meanwhile, her husband, Senate Majority Floor Leader Mike Kowall – also a Republican – revived marijuana bills and shepherded them through the Legislature. Not surprisingly, the president of Michigan Green Technologies donated $400 to Senator Kowall in November 2015.

Back in November (a mere five months ago), former state Representative Mike Callton opposed the November ballot initiative that would legalize recreational marijuana.

So it’s a little… strange… that he now brands himself the state’s “premier consultant” for legal marijuana. In fact, he’s even encouraging municipalities to open their doors to cannabis shops and commercial growers.

Claiming that he’s one of those rare politicians that works for the voters and not the other way around, he claims that he’s just going with it because it’s what people wanted.

Yep. That, and he’s found there’s a lot of money to be made by helping businesses get approval from Lansing to operate medical dispensaries and grow houses.

Never mind that he says he’d never “touch” the stuff himself.

Just a mere ten years ago, it would have been hard to imagine any Republicans fighting hard for the cannabis industry.

But in the Michigan Legislature, Klint Kesto has become a darling of the medical marijuana industry and have even sponsored some of the bills. Of course, it doesn’t hurt that he’s collected at least $13,900 in campaign contributions from cannabis interests between 2015 and 2016.

Kesto’s Republican counterpart in the House, Rick Jones, also received some hefty funds from the medical marijuana industry. Over $16,000. Jones is all about advancing pro-cannabis legislation – despite the fact that in 2010 he led an effort to ban “marjuana clubs” which were designed to make medical cannabis more readily available.

Moving out of the Michigan and into the national spotlight, we have our pal John Boehner.

During his tenure of Speaker of the House, Boehner was “unalterably opposed” to cannabis reform. It would seem he has a different definition of unalterably when it comes to big money.

He calls it a change of heart – claiming that talking with American veterans about how cannabis has helped them with PTSD and other ailments shifted his view.

Not that his longtime political connections, his position on the board of Acreage Holdings and the reality that he’s netting some serious cash has anything to do with this change of heart, right?

That’s some rather bitter medicine to swallow. Or smoke, for that matter.

The Cannabis Industry Continues to Thrive

Yes, it’s “nice” that legalizing marijuana has become a bipartisan issue. It would be nicer if the shared interest with the many Republicans now embracing marijuana were more ideological and less capitalistic.

As cannabis business marketing specialists for many years now, we’re just pleased to see the industry making headway. Where it goes from here, we can only guess.

For more articles relating to the cannabis industry, keep checking back with our blog. We’ll keep you updated.

The age-old notion of the unproductive stoner is SOOOOO hackneyed. Furthermore, it’s…