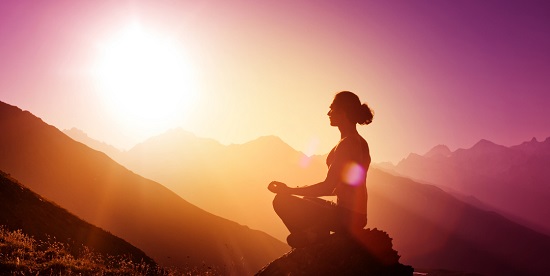 Don’t worry. We aren’t going to stomp on your specific brand of spirituality by suggesting that there’s a connection between cannabis and spirituality.

Then again, maybe we are.

After all, many belief systems are guided by ritual. And cannabis consumption is most definitely a ritual.

But when you observe the ways meditation and intentional breathing in certain spiritual practices alter our chemistry, you’ll find that it’s nearly identical to what happens when we consume cannabis.

So let’s explore this.

The Cannabis and Spirituality Connection

We’re not implying that sitting back and smoking a doobie is a religious experience. (Though it certainly must be for some.) It’s tough to argue though that it can be a very ritualistic experience.

You may even have a specific place where you prefer to partake in this particular activity. Consider it a cannabis temple or shrine of sorts. Even if it’s the backseat of your car.

Then there’s the whole set up involved. There’s the ritual of preparing your cannabis accoutrements so everything is just so. Whether you’re rolling a joint or cleaning and refreshing your bong or pipe, you’re preparing yourself for some sort of journey.

Just as in a holy space, you may even have ambient music playing or incense burning. (And this time, not just to cover up the smell like when you were younger.)

Essentially, you’re opening yourself to whatever may come from the experience of smoking or ingesting marijuana. Then when you’re ready, you close your eyes, take a moment for yourself, go inward, and start the exploration.

In fact, it’s a lot like meditation. And in more ways than one.

How Meditation and Taking Cannabis Are Similar

If you’re not convinced there’s a connection between spirituality and cannabis, spend a little time in India. The religious sages who dedicate their lives to meditation and asceticism there are very often cannabis consumers as well.

You can find these devotional men in locations all across the country smoking ganja from handmade chillums and inhaling bhang (what the locals call marijuana) while praising Shiva.

Hinduism is not the only religion where cannabis is commonplace though. During ceremonies, Shinto Buddhists used to burn hemp plants as incense.  And, of course, Rastas believe the plant elevates your livity, which is their concept of righteous and everliving living.

There are even a handful of Muslims that recognize marijuana as halal (permissible). It all makes sense if you consider the fact that each of us possesses a human endocannabinoid system (ECS).

If you’re not familiar with the ECS, it’s essentially a system in the human body composed of millions of nerve endings that metabolize the over 100 different cannabinoids (such as THC and CBD) found in weed.

Each of the cannabinoids affects our body and brain. Some of the ways are quite similar to meditation. There’s one molecule in particular – anandamide – that brings us full circle with the mind and body connection. And it can be accessed through both meditation and cannabis use.

In the world of marijuana, it’s known as the bliss molecule. So it’s no surprise that many ancient cultures steeped in meditative practices have also been enthusiastic cannabis consumers.

If you’ve ever taken a yoga class, you’ve been asked to focus on your breath. There are also a myriad yoga breathing exercises to help practitioners gain mastery over breath as an effective tool for calming or exciting the nervous system.

This is known as pranayama and it works in very much the same way that smoking marijuana does.

Through pranayama, practitioners learn to train their breath so as to get the maximum oxygen input and carbon dioxide output. This regulates neural synapses in such a way to create a feeling of deep relaxation.

Intentionally moving the breath in and out of the body also calms the fight or flight response in the amygdala. Nerve receptors in the amygdala flare or shut-down in the same fashion when we consume cannabis.

The amygdala is home to both CB1 and CB2 receptors that are responsible for coordination, endocrine function, and sensory perception. So whether you’re meditating or toking, you’re altering the way chemicals such as dopamine, serotonin, and GABA affect your brain and body.

Is Cannabis Consumption a Spiritual Experience for You?

Whatever your take on cannabis and spirituality, the science is there. You do with it what you want.

And to stay up to date on what’s new in the world of cannabis, keep checking back with our blog.

As cannabis marketing and public relations experts, we’ve always got our thumb on the pulse of the industry.

In our last riveting post, we talked about software for dispensaries. So…

On Monday of this week, Detroit officials unveiled a proposed ordinance that…